To create a brand (logo design, branding palate, website) and develop an online presence. We consult and offer ongoing support with site updates, UX (user experience) and Google (both pay per click and organic search). Our primary goal here was to take a business heavily reliant on Yellow Pages and newspaper ads, adopting newer marketing strategies and tech.

Scrap Cars Hampshire contacted us in August 2019, its owner had met with other web design agencies and felt that we (Tidy Design) had been easy going, no hard sale or pressure applied. By mid-September we had designed and deployed version 1.0, this was closely followed by a PPC (pay per click) campaign, to which the scrap car enquiries came flooding in. To help improve and automate this process, Scrap Cars Hampshire v2.0 was discussed and worked on. This being a version of the website that incorporated a third party API that provided a vehicle weight. With this API in place, the process of quoting for a vehicle was fully automated (they paid X per ton). That said; the conversion rate (number of enquires) dropped, so it was decided to revert back to a generic enquiry form. I guess this goes to show that picking up the phone and talking to potential customers still works and should not be underestimated. Just two months after this website was deployed it reached page one of Google, as you can expect the owner of Scrap Cars Hampshire was very happy. 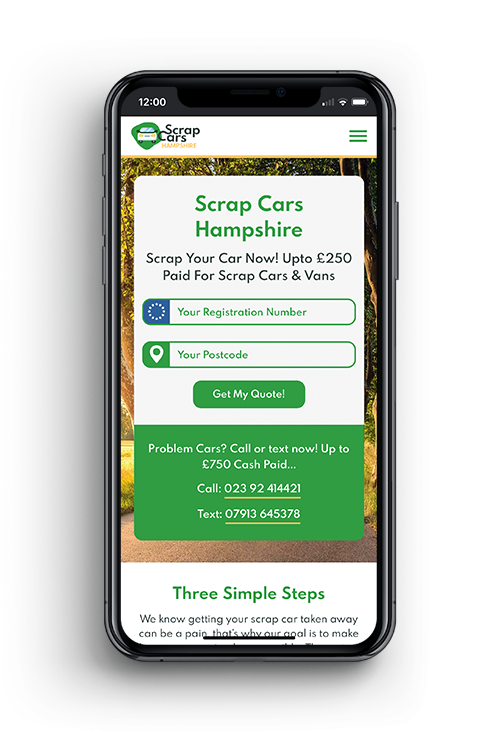